Customers that use our conveying technology

From international corporations to small companies, our customers are every bit as diverse as we are. They prove beyond a doubt that our specialists do an excellent job and employ their expertise in a focused manner. Our strengths, and our promise, are manufacturing for the individual and adapting to the customer’s actual wishes.

being conveyed and thus offer quick solutions for a multitude of tasks. We modify standard elements (such as roller tracks, chain conveyors, shuttle cars, transfer stations, lifts) to a special steel pallet (a skid), which is fitted with a variety of motors. The system’s a high level of controller intelligence enables an automotive manufacturer to perform precise targeted transportation at the correct time for installation in automotive bodywork.

At Daimler Chrysler AG in Sindelfingen, engines for a variety of vehicle types are built and stored in a separate production facility. The main factory gives the engine builder the information on which types are needed next, and in which order, just two to three hours before the delivery.

These engines are then placed on steel pallets equipped with appropriate brackets and loaded into a truck that is already fitted with conveying technology. This truck supplies the engines to the final assembly hall. When they get there, the lorry reverse docks onto a ramp, via which the goods are transferred to the conveying technology once the roll-up door opens automatically. The engines are transported into the hall via four tracks (two lines alongside each other and two lines on top of each other). Here, the installed scanners detect the storage order using the barcodes on the pallets. With the help of several lifts, the engines are taken to higher conveying levels so that as little space as possible is taken up on the floor. The lifts are designed as two-column belt lifts. If a change of direction is needed, turntables and/or swivel tables or transfer stations are used.

To ensure that production runs smoothly, the engines are accumulated in the correct order on the conveyor sections intended for this purpose. The controller calls up the relevant engine at the correct time. The system’s load capacity enables a continuous assembly process which is finished in 2.5 hours. Approximately 1000 engines are run over this transportation line each day. The empty pallets are taken back to the ramp via a separate conveying line with empty pallet buffering. As soon as a truck has delivered the engines, it docks on the empty pallet line and takes up the pallets that it will transport back to the supplying plant. This circuit is constantly repeated.

Summary: Maximum availability while keeping maintenance as low as possible: this is the basic prerequisite for assuring high efficiency in a conveying system.

Pallet conveying technology in a brewery

One of the most traditional companies in Dortmund is the Dortmunder Actien Brauerei AG,
which belongs to the Oetker Group. With an annual output of around 4 million hectoliters of beer, it is one of the largest breweries in Germany.

Max Dörr GmbH Conveying Systems was commissioned to plan, develop and deliver a complete pallet conveying system to merge the relevant number of pallets on the new transfer stations and provide them to the forklift trucks, with the aim of optimizing company-internal pallet transportation of the goods which are ready for delivery and decreasing forklift traffic considerably. Roller conveyors, accumulation roller conveyors, chain conveyors, transfer stations, turntables and shuttle cars constitute the main components of this complex conveying system. Thanks to the system’s design configuration, it is ensured that there are no gaps between the individual chain conveyors and also at the interfaces to the turntables, transfer or shuttle stations, thus assuring that each pallet is optimally transported. This is particularly important for transverse pallet conveying and for half pallets.

The signal transmitters, together with the programmable logic controller, ensure secure and reliable operation of the automatic system. The transportation units for the forklifts, e.g. three EUR pallets, two brewery pallets or eight half pallets, will be automatically built up at the transfer stations. For example, if three EUR pallets are queued up behind each other at the transfer point, ready to be taken up by the forklift, this conveying line will only be released again once the entire transportation unit has been picked up by a forklift. The same principle also applies for other pallet sizes.

The system has been in operation for some time, and all employees involved are very happy with it. It is a shining example, demonstrating how conveying technology can be perfectly adapted to a pre-existing system. Despite the very high demands placed on it, it only requires minimal maintenance.

Our serving conveyor at the Oktoberfest

The Oktoberfest in Munich is one of the biggest festivals in the world. It has been held on the Theresienwiese fairgrounds in Munich every year since 1810 and is visited by around six million people each year.

Our serving conveyor takes the stress out of plating up food as the plates are fed past the servers. The speed of this conveyor can be continuously adjusted using push buttons. The chefs stand to the side of the serving conveyor and set the food on the plates which are driven past on the conveyor belt, which is suitable for food. If food or sauces splash onto the belt, they are automatically scraped off at the end of the belt and caught in a tray. 230 V power outlets are present on either side of the serving belt so that hand-held blenders, for example, can be used.

Here are a few pictures of the serving conveyor at the Oktoberfest: 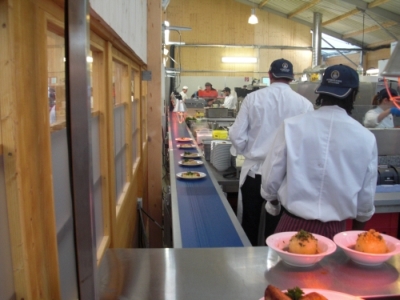 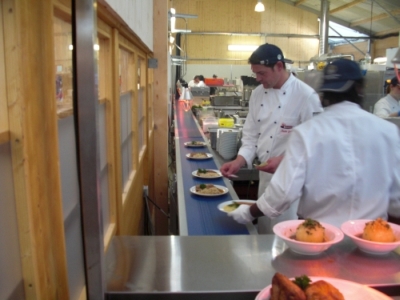 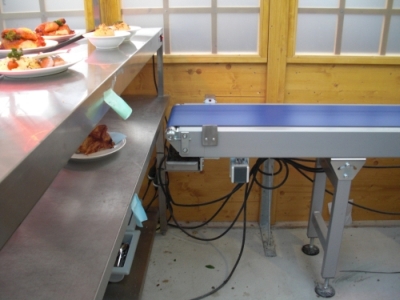 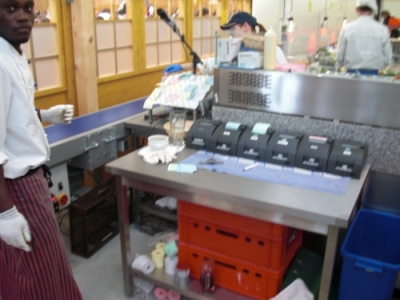 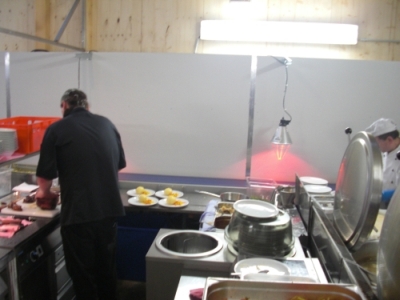 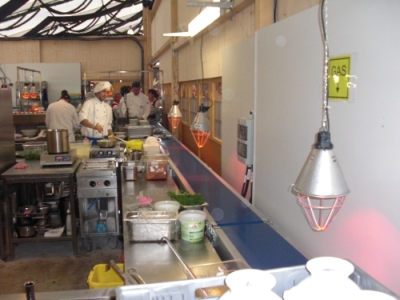 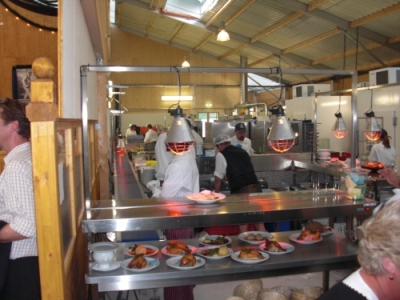 Our glass bottle crusher in use at Wüteria Minerallquellen, a water company, and Edelweissbrauerei Farny, a brewery

We have developed a machine specifically for the beverage industry that crushes all types of glass bottles. Available in three different models, this glass bottle crusher can be implemented anywhere in the process, e.g. via manual feeding with individual bottles, with containers or on automated production lines. 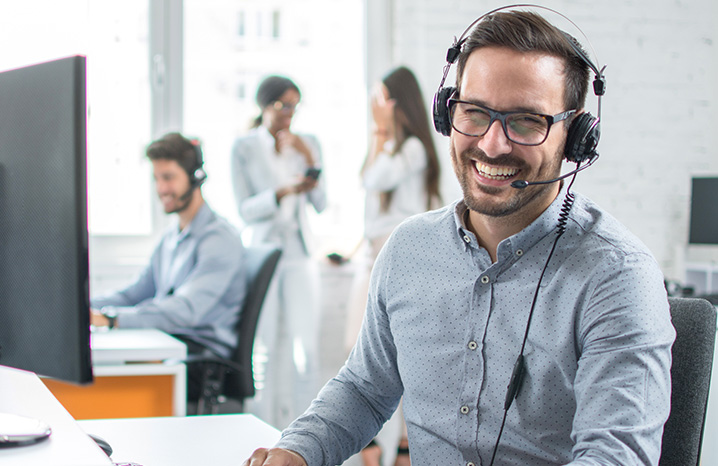 We’re here for you: